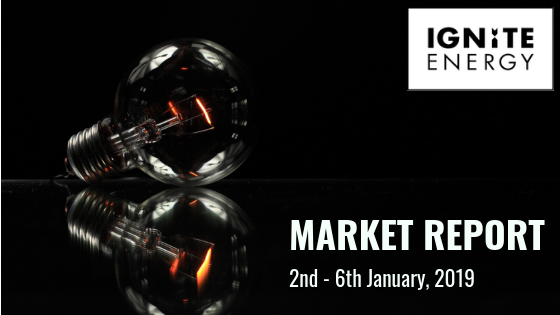 The energy markets experienced a downward price movement during the last two weeks of December. Oil continued its bearish momentum and lost more than 7% with Brent Crude settling at $52.20/bbl despite OPEC’s (Organization of Petroleum Exporting Countries) decision to reduce oil production.

Natural gas and power prices plunged amid mild weather in French and Germany. UK prices mirrored this price behaviour due to an oversupplied system caused mainly by a lower than seasonal demand levels.

However, a colder spell is expected for Q1 2019. Weather forecasts suggest cooler average temperatures in Continental Europe and the UK.

UK natural gas prices dipped during the last two weeks of the year amid milder than expected temperatures, adequate flows from Norway and lower than expected heating demand.

Weather conditions have a greater impact on prompt prices and as a result, day-ahead moved 13.5% lower in the period between 17 Dec and 28 Dec, closing at 57.20p/th. Month-ahead contracts declined 7.5% during the same time and settled at 62.70p/th.

Price movement across the curve saw more moderate movement during this period. Font-curve, Sum-19 plunged by 6.6% and Win-19 decreased by 5.5% during the same two-week period, thus closing at 55.18p/th and 63.45p/th respectively.

Day-ahead showed an upwards movement of 5.7% with a price of £67.30/MWh in the same period. This movement, however, is due to weak renewables (specifically wind generation), which tend to impact prompt prices.

Germany’s preliminary inflation rate was announced and is expected to ease off to 1.7% in December 2018 from the 2.3% figure of the previous month.

In terms of macroeconomics Brexit is at the forefront of the news, as we await the upcoming vote on the withdrawal deal. Theresa May cancelled the vote on the deal that was due on the 11th December and the vote is now scheduled for the week commencing on the 14th January.

The pound has lost strength and has been trading sideways during the last few weeks. Currently is at 1.10 per euro. That’s a significant drop on a monthly basis, where pound lost almost 1.50% against the euro.

WHAT TO WATCH THIS WEEK