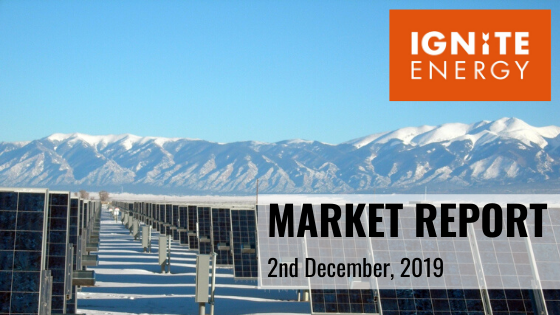 The British wholesale power market started the week relatively high before easing off as the week progressed due to overcast weather and mild temperatures. Renewables generation started the week soft thus resulting in higher reliance on gas-fired turbines.

UK natural gas prices continued their bearish motion as the gas network was undersupplied, but mild temperatures and low demand softened the impact. We saw high levels of Norwegian flows coming to the UK and strong LNG send out during last week but that was capped to 60 million cubic meters as we only received one LNG cargo.

In the wider energy commodity complex, carbon prices opened the week softer, trading at the €24/tCO2e mark but rose €25/tCO2e due to recent news from the new EU commissioner stating she intends to increase the 2030 renewables target from 40% to 55% for all country’s which applies pressure. Oil prices had a promising start to the week climbing to $64/bbl mid-week. Thanksgiving was on Thursday which resulted in limited activity in the market. Recent news from Russian oil companies stating that they will not be looking to deepen their production cuts influenced oil prices, which fell to $62/bbl.

Gas prices ended up closing the week on the downside. Prompt contracts for Dec-19 delivery fell between Monday and Tuesday, by nearly 2p/th due to strong supply flows. Prices spiked temporarily mid-week before settling below 41p/th on Friday.

Wholesale power prices in the UK dropped during the previous week. The cold weather and low renewables generation at the start of the week supported day-ahead and front-month prices.  Reliance on gas-fired generation was higher at the beginning of the week before an increase in wind generation pushed prices on the downside.

The Business confidence index in the EA (European Area) for November signalled a decrease from the previous month by 0.03 points to a negative 0.23.  This indicator provides an overall view of the manufacturing sector as assessed and reported by business managers. The indicator considers managers’ future expectations on production and stock levels as well as their overall assessment on past production.

The GfK consumer confidence index in the UK did not change between October and November. Two interesting conclusions were drawn from the results. The first one is that some consumers believe that the upcoming general election will help clear things up in terms of Brexit. The second important outcome is that the overall score of the country’s economic condition (as viewed by consumers) dropped slightly thus reflecting a degree of uncertainty.

We expect an influx of LNG arrivals in the UK with almost 15 tankers scheduled to arrive by the end of next week. The strong supply levels will probably offset any upside risk from the low temperatures we observe at the start of the week.

Thursday 5th November:  The OPEC meeting will take place in Vienna this week. OPEC members and Russia are expected to decide on whether to extend their supply cuts beyond the first quarter of 2020.

Friday 6th November:  The US Non-Farm payrolls for November will be announced. The job gain for October was 128 thousand jobs while market expectations are set at a 175 thousand job increase for November.