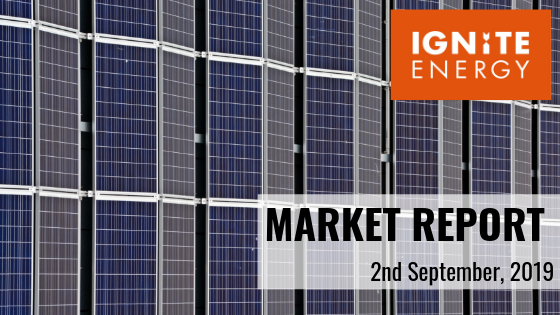 British wholesale natural gas prices moved further on the downside last week, by 1.8% on average, on the curve contracts mainly due to reduced levels of demand.

On the wider energy commodity complex, oil prices spiked on Wednesday following the release of the EIA report that showed a 10m barrel reduction in US inventories. That added support on oil prices that settled at $59.25/bbl, a 3% movement on the upside.

On the Brexit front, the Pound is currently trading at relatively similar levels to the previous week, that is €1.10 and $1.21. We should expect to see some movement in the FX this week as we approach the Brexit deadline on the 31st October.

The British wholesale natural gas prices dropped by 1.8% on the curve contracts on average, during last week due to the lower levels of demand.

British wholesale power prices mirrored the natural gas movement. Prices dropped due to strong wind generation for another week and a decrease in underlying fuels.

The UK consumer confidence index has fallen by 3 points to -14 in August 2019 from the previous month. The uncertainty caused by Brexit and concerns over the global economic outlook influenced consumer sentiment.

Outlook: This week we would expect the increased wind generation to continue. As for the UK gas system, it is expected to remain relatively tight as we enter the end of the maintenance period.

Friday September 06: The Q3 GDP growth rate for the European Area will be released. The increase in Q2 was 0.2% despite the contraction of the German economy in the same period.

Friday September 06: The US non-farm payrolls for August will be released. The job gain for July was 164 thousand.