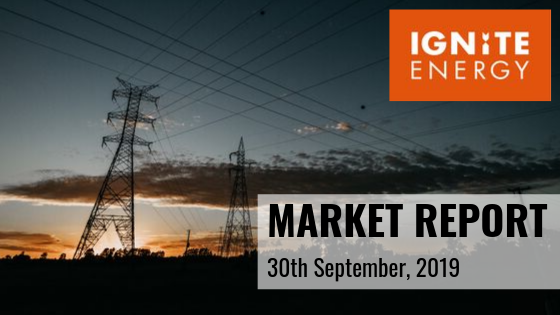 The British wholesale power market has experienced no major market price fluctuation in the past week. After last week’s report that some nuclear power plants may contain faulty parts, EDF cleared any maintenance work needed to rectify this.

This week French ministers criticised EDF over their continuous power delays and EDF’s most recent announcement regarding welding problems at some of its nuclear reactors and extra costs to complete the Hinkley Point C nuclear plant. This could cost up to £3.6 billion along with causing further delays.

In the wider energy complex, oil prices decreased by 5.3% due to a British-flagged tanker that was detained by Iran for 10 weeks, docking in Dubai on Saturday. The tanker was involved in a standoff that has stoked tensions along a vital global shipping route for oil.

British wholesale natural gas prices decreased by 2% on the curve contracts on average, during last week.

British wholesale power prices have had little movement with the Winter-19 contract trading in line with prices seen on Monday morning at £53.25/MWh.

On the macroeconomic front, The United Kingdom is due to leave the European Union on the 31st of October with the Prime Minister stating it will happen whether a deal is there or not. However, MPs have passed a new law requiring the Prime Minister to seek an extension. EU leaders believe a new extension is likely. This has had an impact on the Pound, starting the previous week at $1.25, we now see a drop in confidence as it decreases to $1.23.

The Pound slightly weakened against the Euro during the weekend and is currently priced at €1.125.

Large shifts in supply come from Norway, with Langeled up 29mcm/d at 33mcm/d. This is due to the end of several upstream maintenances at the end of September. We should expect the return of Norwegian flows to the UK as an extended period of planned maintenance is scheduled to come to a halt. It is therefore likely that flows into Langeled will ramp back up providing system flexibility. Last year Langeled was operating at 28 MCM/D compared to this year a 5 MCM/D.

On the macroeconomic front, present temperatures are not dipping cool enough to significantly impact gas demand which is forecast to remain between 160-170mcm. There are 4 LNG tankers due in next week so we should see LNG send out remain high throughout the week.