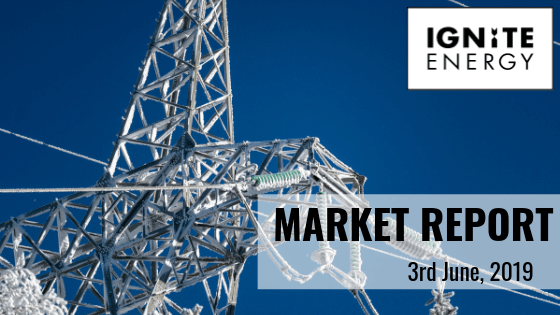 The British wholesale natural gas and power markets closed the week significantly lower with front-season contracts dropping by more than 2.5% on Friday, day-on-day, at a settlement price of £55.85/MWh and 52.35p/th for the power and gas contract respectively.

The week started more firmly for both markets, however renewables generation picked up significantly from Thursday onwards with wind supply contributing more than 7GW to the generation mix. On top of that, both weather forecast models, the GFS (Global Forecast System) and the ECMWF (European Centre for Medium-range weather Forecasts) agreed on a warmer weather outlook for the period ahead, thus adding more pressure on both prompt and curve contracts.

In the wider energy complex, Brent Crude oil dipped by more than 11.00% last week and is currently trading around $61.00/bbl as we see a continuous build-up in the US oil inventories. In addition, the USA President imposed tariffs on Mexican goods. The new tariffs added further pressure in the oil market on top of the ongoing trade war between the USA and China.

Power prices followed the natural gas movement and moved significantly on the downside.  Increased renewables generation towards the end of the week, warm weather outlook and zero coal generation showed the way to both prompt and curve contracts despite demand being relatively strong during all days.

The GfK consumer confidence index in the UK increased to -10 in May 2019. It was held steady at -13 for the past three months as the consensus among consumers did not indicate overspending habits. The result illustrates that despite the overall uncertainty around Brexit, consumers have slightly increased their spending thus adding three points in the confidence index.

Friday June 07: Germany’s Balance of Trade for April will be announced, at 07.00 UK time. In the previous month, the German economy achieved a surplus of €22.7 billion, that was 7.70% down from February’s surplus.