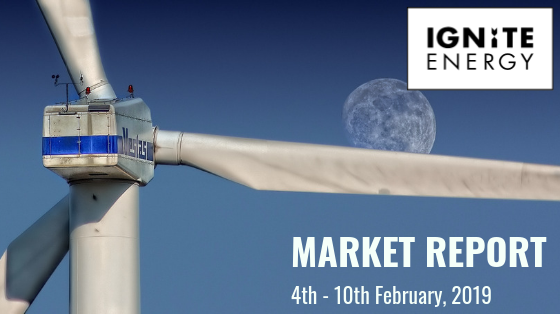 Last week has been bearish for the UK power and natural gas markets despite the cold temperatures. Demand has been consistently above seasonal normal levels. However, adequate supplies from Continental Europe and increasing LNG flows have kept the system well supplied through the cold spell.

Oil prices increased, week on week, despite a down movement at the start of the week. Oil settled at $62.75/bbl on Friday, nearly 5% higher from last Monday’s close. As of today morning, however, the oil market has opened stronger amid OPEC-led supply cuts and the US sanctions on Venezuela’s petroleum production. Currently benchmark, Brent Crude oil is trading at $62.70/bbl.

UK natural gas prices declined throughout the last week amid healthy supply flows from Norway, strong flow through the Dutch interconnector and a milder weather outlook for February.

Wind generation started the week at high levels but lowered down as we moved towards the end of the week due to the cold temperatures. As a result, the grid became more reliant to CCGT, coal and nuclear generation.

UK power prices eased off during the previous week due to softening renewable generation, weaker coal and carbon markets and a mild weather outlook for the upcoming weeks.

The UK parliament voted against any amendment that would require a legal obligation on behalf of the UK to extend its withdrawal deadline further from the 29 March 2019. The Pound has moved sideways in the last couple of weeks and is currently trading at 1.14 per Euro.

USA’s Fed has decided not to increase the interest rates and as analysts suggest it is unlikely an interest hike will occur in this year.