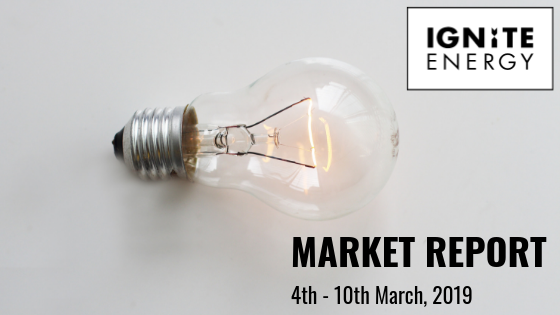 Last week, natural gas and power prices edged higher, hence reflecting the cooler revised weather outlook for the first week of March. The week on week price uplift is also attributed to weak wind generation during most days as well as curtailed Norwegian imports that were caused by outages.

The overall energy commodity complex strengthened throughout the week with Brent Crude moving by half a percent on the upside and settling at $65.07/bbl on Friday. The carbon market however illustrated substantial gains with EU carbon allowances moving by more than €3.00/t higher on a weekly basis before settling at €22.30/t.

The Pound’s value has increased against the common European currency following Brexit news last week. The markets have viewed Theresa May’s revised Brexit timetable with optimism. The new meaningful vote will take place on 12 March and depending on the outcome a vote on extending Article 50 might even take place on the 14th March.

The UK natural gas market moved higher on a weekly basis following the revised weather forecasts that predicted lower temperatures for early March compared to previous forecasts. On top of that, poor wind supply weighed on prices even further.

The UK’s construction PMI has fallen for first time in 11 months, as published by Markit Economics. The PMI for February stands at 49.5 points and below the 50.6 in January. The interpretation of the result suggests a slowdown in commercial building and civil engineering activity. However, the news did not seem to have a significant impact on the currency pair £/€. As of Monday afternoon, the Pound is trading around 1.165 per Euro.