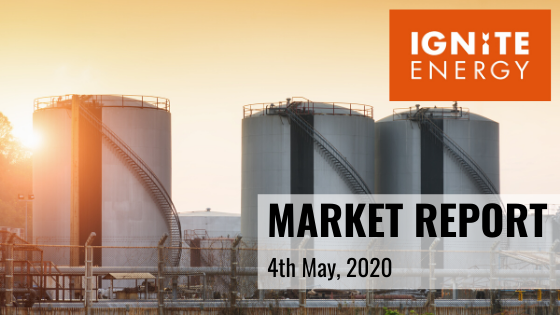 UK wholesale natural gas prices slipped by another 1.5% last week, on the front and mid curve contracts, on average. Cooler than seasonal normal temperatures and an undersupplied gas system, for most part of the week, have contributed to prices moving lower on a weekly basis.

The power curve followed suit, with near curve contracts up to Sum22, losing 1.9% on average, from a week ago. Renewables generation was considerably low and oscillating around 4GW-7GW during most days, equivalent of roughly 5% contribution to the power generation mix.

In the wider energy commodity complex, Brent crude prices settled at $26.44/bbl on Friday after another volatile week. Oil prices started the week soft, however, they rebounded on Wednesday amid a lower than forecasted build up in US crude inventories. On top of that, prices saw an early upside on Friday 1st May, as the OPEC+ agreed supply cuts took effect. Carbon prices moved below €20/t this morning, on the back of increased auction volume relative to the previous week.

In the British wholesale natural gas, the downwards momentum persisted last week despite some shortages in the UK gas system early in the week. Comfortable pipeline imports from the Continent, added further pressure on the forward curve amid no sign of a slowdown in the LNG market.

UK power prices followed the downwards price change in the gas curve, with the general commodity complex unable to provide upside potential for power prices. The increased wind generation in the Continent and mainly in Germany, was able to provide strong flows to the UK throughout the last week.

Month-ahead closed on Thursday at £24.50/MWh, that is 3.9% higher, week on week, despite the overall softness in the forward contracts.

FED Board Members met ion Wednesday to review the federal fund rate level that is 0.00% – 0.25%. The Bank also announced that the Main Street Lending Program will include small and medium sized companies that were impacted by the pandemic.

The Eurozone’s economy contracted by 3.8% in Q1 2020, QoQ and the slowdown is attributed to the heath crisis.  This is the deepest contraction since 1995.

The US EIA (Energy Information Administration) published the weekly changes in US crude stocks on Wednesday. The inventory levels increased by 9 million barrels against 10.6 million barrels from forecasts. This is the first time since the start of the pandemic, that the actual change is below the forecast level.

Outlook: Power prices started firmer this morning on the back of the cooler weather outlook with temperatures expected to oscillate around seasonal normal levels throughout the week. The supply side remains comfortable while demand is at deep lows. The gradual “reopening” of the economy will have an effect on how demand levels will behave in the coming weeks.

Thursday May 07: The Monetary Policy Committee of the BoE will meet to review the level of interest rates. No change is likely to occur as the historical low 0.1% was decided at the beginning of the pandemic, in order to stimulate the economy.