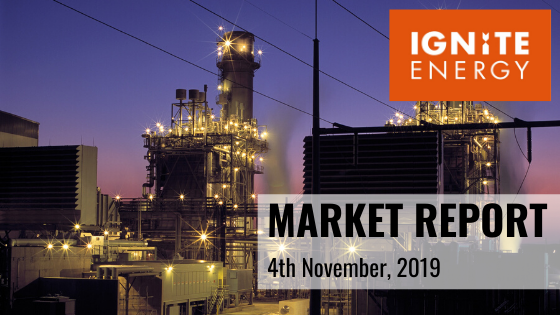 The British wholesale power market softened during the past week, by around 1% on the forward curve. Renewables generation is currently contributing 21% of the UK’s generation mix and as we approach milder weather, we can see a steady increase of coal generation which is now at 5%, the same level we saw at the same time last year.

On the gas front, The UK opened undersupplied causing slight firmness on front-month gas prices. LNG flows have picked up with flows from Langeled going in the other direction. Dragon terminal is flowing at 25mcm, the highest it has been since April. It is believed we can expect a further 10 deliveries arriving in the UK and demand from Europe is expected to remain weak due to heavy LNG supply.

In the wider energy commodity complex, Brent Crude rose by 3.7% last week after some positive news regarding the potential deal between the US and China.

Gas prices dropped slightly on the curve as flows from Langeled increased throughout last week. Flows dropped on Friday when Equinor tried to flex the Troll production but the level of supply through Langeled remains relatively strong up to this morning. With MRS injections nominated at 8mcm/d this morning, and assuming adequate flows through Langeled, we might see storage withdrawals.

Gas-for-power-demand acted as a bullish catalyst for day-ahead and prompt prices, after an increase of 20%. Day-ahead prices remained bullish during the last week mainly due to higher LDZ imports and high levels of flow from Langeled throughout last week. Seasonal contracts remained bearish due to an unexpected outage at the forty’s pipeline along with higher temperatures than seasonal normal levels.

In the power market, we see the front-month still trading at a wide premium against the day-ahead market, that is trading around £34.25/MWh. The month-ahead contract is trading at £48.96/MWh a rise of 6.7% since last week. Since Month-ahead is currently trading 27.12% lower compared to a year ago, this is due to forecasted higher temperatures along with rising levels of LNG storage.

On the macroeconomic front, the UK general election is due to take place on the 12th of December with clashes already taking place between Boris Johnson and Jeremy Corbyn over the NHS and other key topics. The outcome of the election will have a dramatic impact on the UK’s Brexit strategy and future relationship with Europe.

The Pound is currently trading at €1.1583. Throughout last week this fell to €1.1567 and rose to €1.1602 but has open flat compared to last week. This is due to the ease on the Pound as Brexit has been delayed once again.

Outlook: We should expect the UK market to be well supplied this week as we see an increase in flows form Norway. Temperatures are most likely to remain below seasonal average temperatures thus pulling gas demand above average for this time of the year. We are expecting 6 LNG tankers to arrive in the UK by Sunday, while at the same time LNG storage levels are at full capacity and as a result, they will have to release some excess capacity.

Tuesday 5th November: The USA trade balance for September will be published. The US trade deficit widened by almost $1 billion between July and August and reached $54.9 billion. Consensus data suggest that the deficit will narrow down to $52.5 billion.