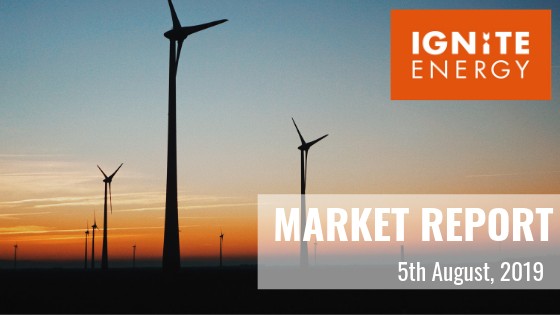 British wholesale power and natural gas markets moved on the upside last week. A bullish start in the wider energy complex and the planned maintenance at UK nuclear sites have been the main price drivers last week.

In terms of the power generation mix, we saw renewables generation being relatively steady around 3-5 GW during most days while interconnectors have been steadily importing all week long from the Continent.

The UK natural gas system was well-supplied with demand remaining above seasonal normal levels all week. At the same time, LNG send out was considerably low with only one tanker having docked in Britain and no LNG arrival seems to be on the horizon for the coming days.

Carbon saw some upside movement after the EU auctioned 1.388m spot carbon permits at €28.9/t on Thursday morning.  Currently, carbon is trading just below €29/t while the technical analysis indicates that the new resistance level is at €30/t.

Oil prices had a firm start, but they then dropped following the new tensions between China and the USA and the new tariffs that the Trump administration is planning to impose on Chinese goods.

The British wholesale natural gas prices rose by 1% on average across the curve due to planned yearly maintenance and high demand at the beginning of last week. However, as we progressed in the week, we saw these effects wearing off.

British wholesale power prices mirrored the natural gas movement. A firmer start in the week was followed by a softer close due to the softening in the wider energy commodity complex on Friday.

Last Thursday, the BoE voted in order to keep the interest rates unchanged at 0.75%, as expected. The Bank’s stance in a soft Brexit scenario will be to limit any interest rate rises in future.

Nonfarm payrolls in the USA increased by 164 thousand in July 2019, a result that was in line with market expectations. The job gain in June was 193 thousand. The jobs that saw the biggest increase were professional and technical services and healthcare.

Outlook: Temperatures are likely to drop tomorrow but will most likely remain above seasonal normal levels during the week. We might also see an increase in solar generation in the following days to around 7GW.

Friday August 01: UK’s actual Balance of Trade for June will be published. The trade deficit in May was £ 2.32b.