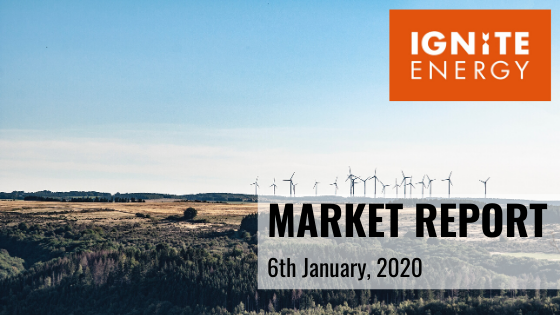 British wholesale power prices experienced low liquidity at the beginning of last week because of the festive season. Prices reached low levels with season-ahead contracts trading as low as £38/MWh. Wind generation started below 3GW last week but as the week progressed, it ramped up above 12GW from Wednesday onwards and up to the time of writing.

Nuclear generation provided relatively steady flows of 6.9GW while reliance on CCGT gradually dropped as renewables picked up. Liquidity in the power market returned after Thursday.

The UK natural gas wholesale prices were pretty slow to get moving last week as the holiday season affected the liquidity levels in the gas market. Liquidity returned on Friday. A short-lived outage at the Oseberg gas field caused disruptions on the 30th of December, however, the system was oversupplied for the remaining of the week. Demand levels were below seasonal normal levels due to mild weather for the time of the year. On top of that, strong LNG flows keep adding more flexibility to the system.

In the wider energy commodity complex, oil prices jumped on Friday on the back of the US drone strike in Baghdad that resulted in the death of the Iranian general, Soleimani, who had a strong influence in the region. The attack, ordered by the US president, caused major concerns in the oil market as major oil-exporting countries located in the Middle East could be at risk if Iran chooses to retaliate. Currently, oil prices are priced at $68.60/bbl.

Natural gas prices rose last week with month-ahead closing 5.2% higher at 33.50p/th. Nonetheless, the bearish trend in the energy markets is more than visible. A year ago, during the same period, month-ahead contracts were priced at 60p/th, that is 44% decline YoY.  Among the most important drivers of the drop are the strong LNG flows that hit record levels in the previous month. No major outages have been reported, while the next yearly maintenance period for most oil and gas fields is scheduled for April.

UK power contracts rose amid stronger carbon prices that moved higher on Friday by 2.4% within-day and settled at €25/tonne. Nuclear generation provided a steady output of 6.9GW during most days while coal generation reached 3.3 GW on Friday despite starting the week subdued.

The USA and China will sign the first phase of their trade deal on the 15th of January as announced by the US president. However, there are still questions about market access and intellectual property. Phase 2 has not been agreed yet.

Results from the UK services PMI indicates a stabilized services sector activity in December. Export sales dropped for the fourth consecutive month while employment increased the most since July.  On the other hand, Eurozone’s services PMI reached a four-month high in December despite a persistent decline in new export business. Employment increased while new work growth picked up.

Outlook: The weather outlook for the week is expected to be mild but windy in the UK while temperatures are not expected to drop significantly. In terms of supply flows, LNG flows remain strong with 5 tankers scheduled for arrival until the end of the week. At the same time MRS (Medium Storage Terminals) capacity levels are at 96%.

Monday, January 13: UK’s Balance of Trade for November will be published. October’s deficit was at £5.19b.