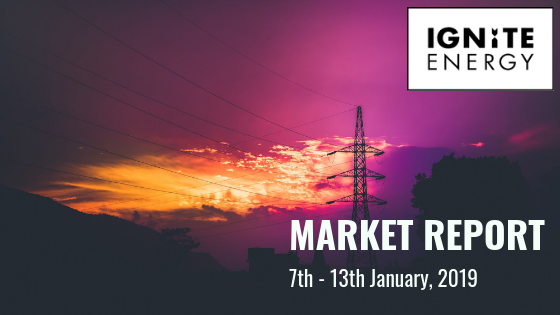 UK gas and electricity prices raised about 2% week on week in the first week of January. The mild weather and relatively low gas demand eased off the pressure on the commodities during the festive period. However cooler weather conditions and tight oil market supply/demand conditions meant UK commodities started rising last week. Crude oil prices started returning to a more bullish momentum amid a slowdown in shale production in the US and tightening oil exports to the US by OPEC. The Pound continues to trade around 1.11 against the Euro.

UK natural gas prices raised last week despite gas demand falling below seasonal norms. The system was oversupplied by more than 20 mcm, however, prices moved up. At the same time, windy days contributed to healthy renewable generation, taking off the pressure of aging gas infrastructure. Day-ahead and month ahead raised by 3% and 4.4% respectively, despite healthy daily gas supply.

The price movement in curve contracts was more moderate during this period. Font-curve, Sum-19 raised by more than 2.2% and Win-19 increased by 1.9% during the same two-week period, thus closing at 54.54p/th and 62.83p/th respectively.

The US and China started first talks in Beijing aimed at resolving their trade dispute. The trade war between the two biggest economies in the world resulted in massive economic turbulence across the world. Both countries are looking to achieve an agreement and refrain from further tariffs for another 90 days.

The Eurozone’s retail trade increased 0.6 percent from a month earlier in November 2018.