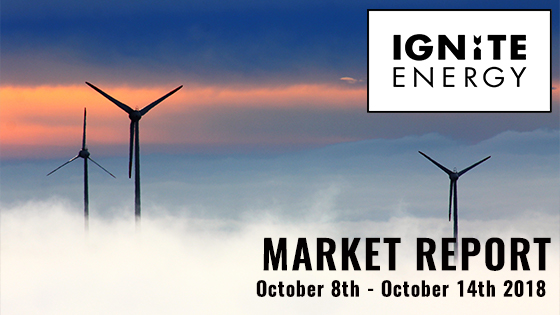 The beginning of Winter 2018 has pushed Nat gas prices in the UK higher. Month-ahead gas contracts moved as much as 3p/th from high to low. Gas volatility was quickly filtered into power prices, so the electricity curve was oscillating within the £2/MWh range.

UK day-ahead prices are following a decreasing trend, in line with a healthy renewable generation. Monday morning brought bearish momentum with day ahead trading 2.61% lower than a week ago and consolidating at £67/MWh, while month ahead was at £71.55/MWh, 1.47% down week on week.

British wholesale gas prices are falling on month on month. The gas demand system is at the moment oversupplied by a strong supply from Norway that increased at the end of last week. An expectation of cooler weather impacted on the supply forecast this week.

While short-term contracts – the day ahead and month ahead, are heading downwards, the far curve has strengthened.

The U.S unemployment rate hit 3.7%, the lowest rate since December 1969. The US economy gained 134,000 jobs in September and average hourly earnings rose at an annual rate of 2.8%

What to watch this week: