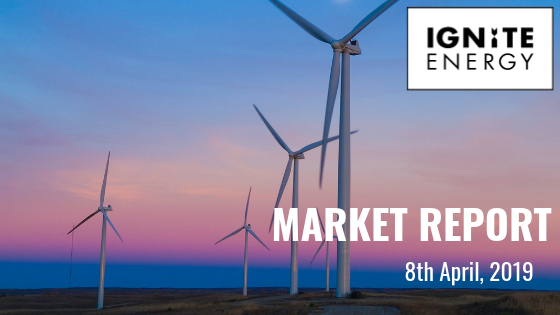 UK natural gas prices started trading in the downside during the first week of April, however, they reversed from Wednesday onwards due to increasing levels of demand. On Friday, markets experienced an unexpected rally due to outages that reduced Norwegian import flows through the Langeled underwater pipeline. The within-week rise in natural gas prices was more than 14%. Power prices followed suit as natural gas gave direction to electricity contracts.

In terms of the wider energy commodity complex, oil prices reached a five-month high with Brent Crude settling at $70.34/bbl on Friday. The spike is attributed to the ongoing OPEC-led supply cuts and the US sanctions on Venezuelan oil production.

In addition, recent news suggests that Libya, which is an OPEC member, is at the brink of a civil war, something that might result in significant disruptions in oil exports in the near future.

Non-farm payrolls increased by 196k in March, thus moving higher from market expectations of 180k. The job gain rate in February came up to 33k.

Outlook: Wind generation is expected to start low on Monday and continue further down on Tuesday. There is a variation between long-term and short-term weather forecasts regarding the duration of the upcoming cooler temperatures. If cold weather persists until the end of the week, this might result in firmer prices.

Wednesday, April 10: The President of the European Council, Donald Tusk, has called a meeting with the EU leaders in order to decide upon Theresa May’s request for a further extension on the Brexit deadline.
Wednesday, April 10: Data on the actual US annual inflation rate for March will be published at 01.30pm, UK time.