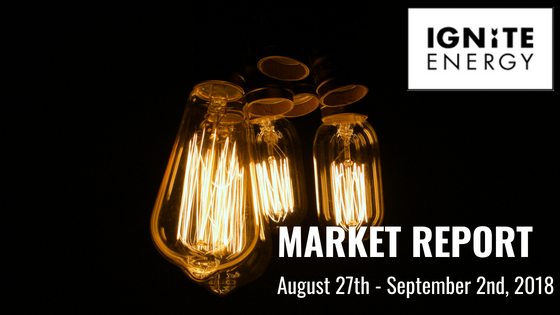 UK nat gas prices edged up higher as Brent Crude rallied over the last week. Although Chinese refineries were demanding more oil, the oil production curb imposed by Russia and OPEC was still in place. In addition to this, US stocks of oil are running low. Global reservoirs of oil are tightening, having an impact on the UK energy market. As a result, Win-18 is currently trading over 73.65p/th, reaching the highest prices in the last 12 years.

Month ahead settled at £65.60/MWh, while day ahead consolidated around £62.70/MWh. Wind generation reached as high as 8 GW, hence the day ahead prices were trading lower week on week.

The Confederation of British Industry’s (CBI) monthly retail sales gauge rose to +29 in August from +20 in June. This means that the major British retailers expect a surge in sales in August.

Contact us today to learn how we use our expertise to help businesses save millions of pounds on their energy.