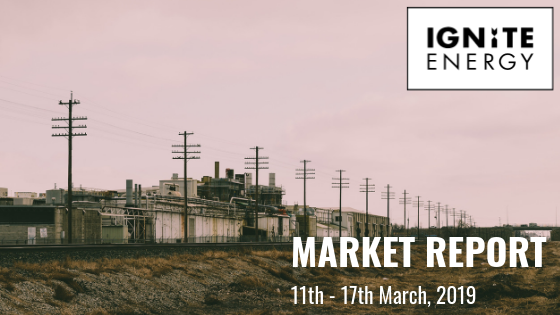 Last week saw power prices in the UK and the Continent moving on the downside as a result of the mild weather conditions. UK power contracts declined by 1.2% week to week, while natural gas prices dipped by 2.5% on average for the same time period.

The overall energy commodity complex traded close to last week’s levels with Brent Crude oil trading sideways during most days. EU carbon allowances traded range bound, at around €23.00/t however, as Brexit remains a main driver for the carbon market, the outcome of the meaningful vote on Tuesday is expected to have an impact on carbon prices.

Data from the US Non-Farm Payrolls revealed that jobs in February 2019 increased by only 20 thousand, the lowest job increase in two years. The result was below market expectations of 180 thousand.

The Pound traded around 1.17 per Euro since Theresa May announced that a vote on extending article 50 might take place this week if the Brexit Plan does not pass on Tuesday. However, there was little if no progress at all on the Brexit talks between the UK and the EU during the weekend.

The Pound is currently trading at 1.15 per Euro.

Developments in Brexit talks indicate that Theresa May is heading for a defeat on Parliament tomorrow. According to the Financial Times, the talks between the UK and the EU officials did not progress as the EU Commission’s President did not provide the assurances that the UK’s PM was hoping for. The uncertainty around Brexit caused a drop in the Pound’s value against the common currency.

Germany’s trade surplus for January 2019 was announced today. There is an annual decrease from €17.2b to €14.5b as imports outpaced exports.